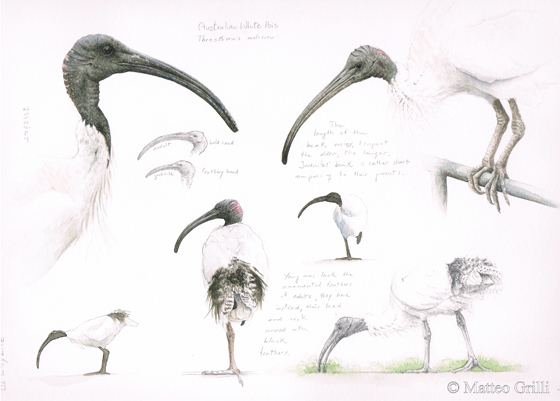 The breeding season for the Australian White Ibis, Threskiornis molucca, has started here in Brisbane. Couples are building nests with twigs and small branches, usually not far from water and high on trees like Mangroves, Palms and also thick Bamboo. Some may probably already have eggs or young hatchlings. 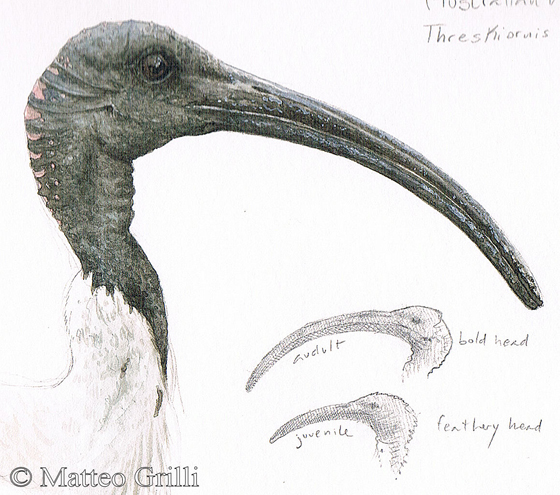 Once the jouveniles leave the nest, they are very easily distinguished from the audults, they have a shorter bill and a dark feathery head compared to the bald head and neck of audults. The new generations also have a much whiter colour compared to the 'dirty' white of their parents. 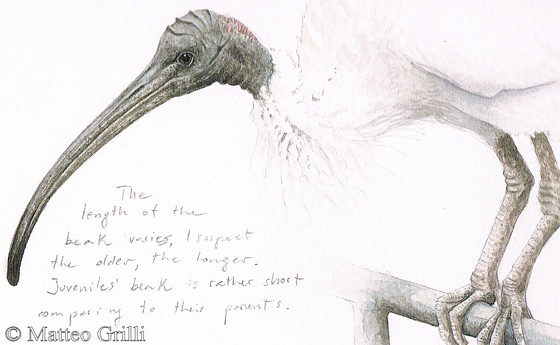 They have a very strong prehistoric look with their bald, wrinkly and scaly skin of head and neck. During the breeding season some magenta-carmine scales of skin appear at the back of audults' heads, as well as along the legs, their blue-black ornamental tertiary feathers become wider and shinier. They also seem to become more vocal and territorial or competitive, honking at each other very loudly. 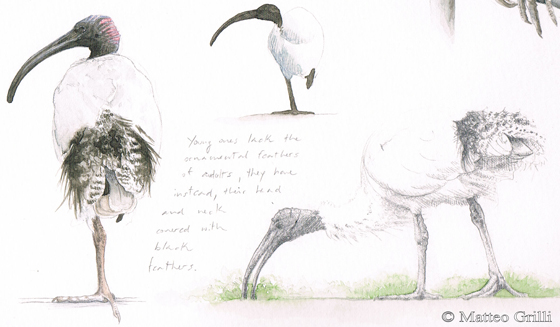 They are opportunistic birds and they've adapted very very well to urban and suburban conditions, it looks like they are more common than crows and pigeons in Brisbane, invasive and shameless they often jump on cafe tables and walk among pedestrians across Queen Street Mall. Not very loved by people... but in the end they're just making the best out of what's available, aren't we doing just the same? 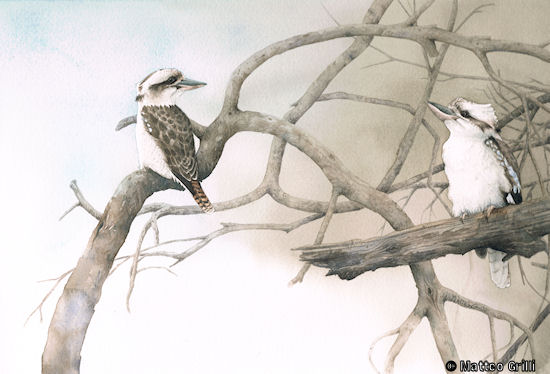 I was captured by the unassuming colours of this bird contrasting so greatly with their strong personality. The explosive 'laughter' of the Laughing Kookaburras Dacelo novaeguineae, can be heard mostly before the sunrise, when it's still dark and after the sunset, just before complete darkness. It is a territorial signal. According to the Aboriginal belief, the Kookaburra's laughter every morning is a signal to the sky people to light the great fire that illuminates and warms the earth. The name 'kookaburra' apparently comes from an Aboriginal language that is now extint, the Wiradhuri from New South Wales. 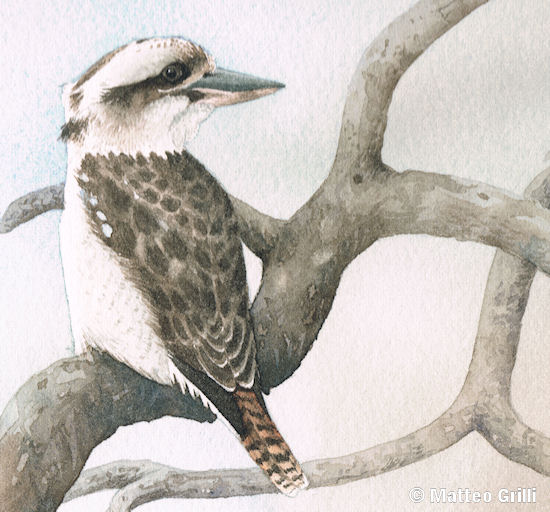 Males and females are almost identical, I've been told males have blue feathers on the rump or upper-tail covert feathers. They can be very friendly especially when people feed them, but I red on the magazine called Australian Wildlife Secrets that it is not recommended to feed meat to wild birds as meat for human consumption is too rich in fat and protein for wildlife. 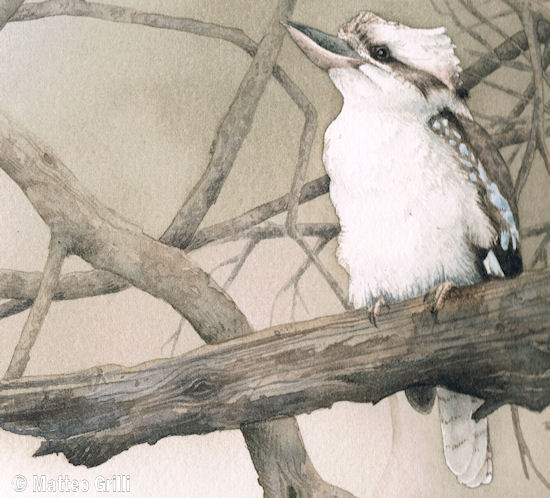 They hunt from the branches or from a favourite perch from which they observe the surroundings until a prey moves close. I once saw a male offering a small snake to the female, but she was not interested... According to the scientific classification, the Kookaburra belongs to the family of the King Fishers Halcyonidae but instead of living by the water, they evolved to be able to live in the drier conditions of the the bush and woodlands of Australia. 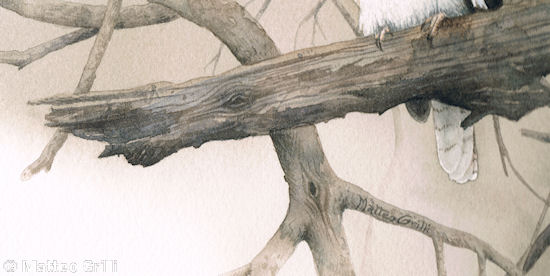 Until next time
All the best
M

I am very very glad to release this information as I just opened my Etzy shop, you will be able to find a selection of reproductions of some of my latest watercolour paintings in three sizes, small, medium and large and I also made a selection of older original artworks dating back from 2006 including before-Australia works that I'm willing to sell. I will be shipping all over the world.

Browsing the shop you'll find all the needed informations, if you don't, please just send me an email. This is all very exciting and I am absolutely thrilled to read your suggestions and feed backs, so please, do not be shy about leaving a comment.

I'm feeling thankful and blessed for all the support I received from both close and far away people as without it, all this now wouldn't be possible.

All the best
MG