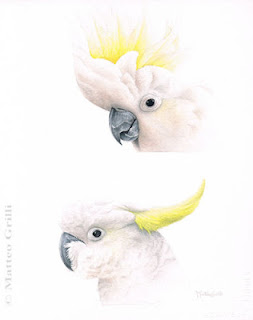 Avian Faces Series available here.
Sulphur-crested Cockatoos are full of personality, it doesn't take long to recognize their cognitive skills (likened to those of a four-year-old child) when they observe with an inquisitive look upon what goes on around the feeder. When relaxed, the crest is at rest, and the feathers around the beak all fluffed up, when excited or alerted, the crest is erected and the head is moved with sudden, jerky movements which shows off the bright yellow, curled feathers. 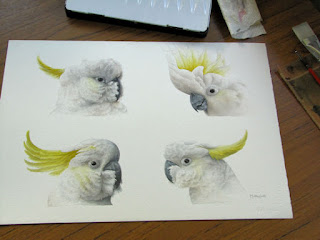 The crest is actually a means of communication. Cockatoos are certainly renowned for imitating human words and this is due to the fact that they are very social creatures, in the wild they have long lasting relationships and to increase their bond the pair develops a 'common language' based on sounds mimicked from each other. As this is not possible in captivity for a single cocky, well, human words or other sounds are used as surrogates. 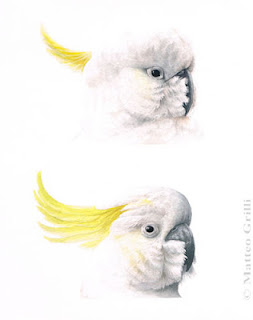 Their flight in the bright blue sky and the distant (or not so distant) echo of their screeches are a common and typical sight even around the city suburbs and parks. But perhaps, the most beautiful thing is to see them up close, in the late afternoon light which makes everything appear rather magical, with its golden warmth wrapping everything and underlining every movement brought by the wind that moves the branches and the golden-green leaves of the Jacaranda tree. A white cockatoo arriving in flight and landing gracefully on a branch, pervaded by that light is the most majestic of sights.
-Cacatua galerita-