The young one was restless, begging for food, but the parents were very quiet and still, the female was looking at me through the branches. Male and female have a slightly different colour, males tend to be grayish, females have a reddish or tawny shade on their feathers. Juveniles are something in between with darker  marks especially over the head.


It is surprising to see their agility and nocturnal activity comparing to their sleepy and quiet behaviour during the day. When threatened, they rely on their amazing camouflage, standing still and assuming an elongated posture to resemble a dead branch.


Tawny Frogmouths are very elusive an mysterious birds, hiding many secrets about their behaviour and biology. Professor Gisela Kaplan's book Tawny Frogmouth reveals many of this bird's secrets, it is the most comprehensive book about this 'Aussie icon' so far, gathering years of research revealing its very surprising hidden secrets. A truly recommended read.


At the end of these two paintings 'Silent Encounters' linked by the same story and experience, I was a bit surprised that 95% of the colours used is a mixture of just Burnt Umber and Neutral Tint, making it all appearing rather monochromatic.
Posted by Matteo Grilli 13 comments:

It is difficult to spot Tawny Frogmouths. Walking through the park I noticed three Magpies on the ground, all three looking very inquisitive and curious towards another bird right between them. The bird was facing away from me so I could only see its back side, a big round head and a rounded body nearly invisible because of its amazing camouflage. Strange to see one on the ground in the daylight.


Although Tawny Frogmouths - Podargus strigoides - are very similar to owls, they are not, they belong to the order of Caprimulgiformes and to the Frogmouth family, Podargidae. They are very skilled night hunters with big eyes and very soft feathers for a perfectly silent flight. The Magpies eventually lost interest and the bird (a female) then flew after a few minutes on a nearby tree where a nearly fully grown young was looking straight at me. On another branch there was what looked like the remains of an old nest, a flimsy pile of thin twigs,  half of it on the ground. I found some feathers.


When painting feathers there is often a feeling of being more a scientist than an artist, or something in between at least, like observing things through a microscope or a magnifying glass. Their feathers are covered with a layer of what appears to be fur, very very soft and this is the reason for their silent flight, just like owls.


To be continued next week... 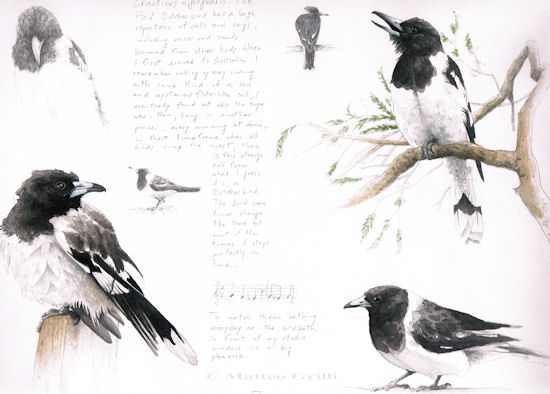 Every morning at dawn, in that time frame when all birds sing the most, in spring, I could hear this strange flute-like call from the Pied Butcherbird -Cracticus nigrogularis- the tune was perfect in pitch and time and slightly varied at times. It sounded very 'human' in the sense that I thought it was somebody whistling. I recorded it and transcribed it:

This bird may be considered the singer of the bush, with its huge repertoire of calls and songs of its own but also borrowed from other sources. For some reason they are aware that when a human is gardening there might be insects and worms around, so they come and perch very closely to the working gardener and carefully observe the surroundings until an insect runs away from the digging and pruning. The hunter then quickly flies down and grabs its meal. 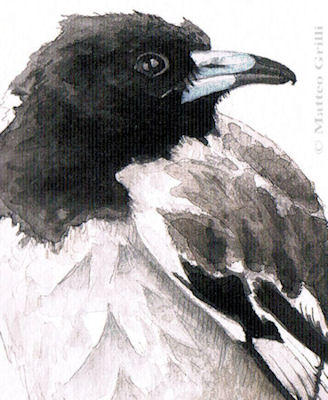 Their calls and songs are made up of a wide range of mellow, sweet, mysterious and sad whistles and it is one of the most characteristic sound of the bush and suburban gardens. The pair living around our garden regularly comes for drinking and bathing in the bird bath just in front of my studio window. To watch and listen to them is a big pleasure. Once, just during one of its visit, it flew straight from the bird bath to the wall of the building behind it, flying away in less than a second with a gecko in its beak. Very skilled hunter, no wonder we now have a big curious young discovering the world after its parents. 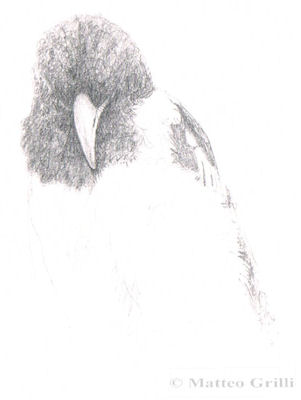