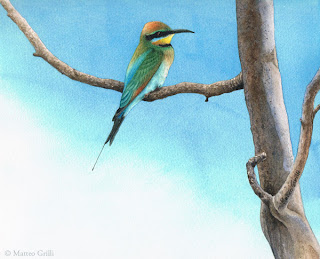 The Nudgee Beach Reserve is located on Brisbane's north coast and not far from the airport. It is part of the Boondall Wetlands Park, a favourite of mine, where wildlife is always aboundant and sightings are guaranteed. The location is equipped with wooden paths that will bring you over the muddy banks of Nudgee Creek where lots and lots of crabs hide themselves in their burrows just as you walk over. 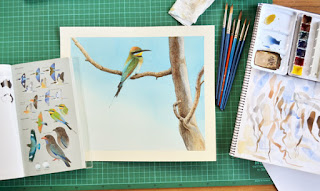 The walk stretches on in a very interesting habitat characterized by Mangroves growing on both sides of the path, the ground looks rather muddy due to the changing tides thus making the perfect environment for the crabs. Bird life is also rich, in Spring the sweet song of the Mangrove Greygone fills every corner of the mangrove bush, just as the call of the Collared Kingfishers, chasing each other between the braches and over the mudflats at lowtide. 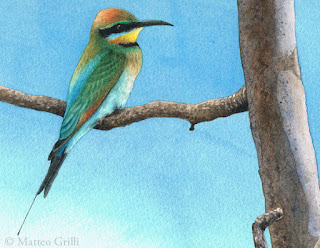 At the point when the mangrove bush thins out, the banks of the creek become sandy and still with plenty of high trees around, it provides the perfect habitat for the Rainbow Bee-eaters, Merops ornatus, a migrant from the north who spends Spring, Summer and Autumn down south.
Their shape in flight, their musical chattering and their colours make them unmistakable. A range of greens, blues, yellows, blacks and oranges darting in the sky is always an exciting sight.

But they are rather shy and won't allow you to get too close, so good binoculars are a must. Their agility on air is outstanding, they make catching insects in flight look like the easiest thing. The male allowed me to watch him for a long time as he was perched on a lower branch a Eucalyptus tree in the shade. I was able to notice the only difference between male and female that is the pair of central tail feathers. Both sexes have two extended shafts which are longer in males.

Somewhere, hidden between the sands along Nudgee Creek is their tunnel nest, bearing the new generation of Rainbow Bee-eaters.
Posted by Matteo Grilli 4 comments:

Greeting Cards and a Gift for the Readership 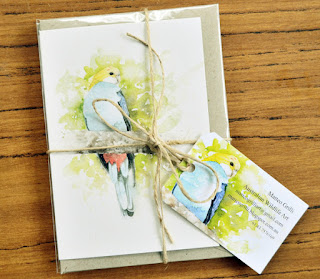 I recently thought about giving the readership of Matteo Grilli Wildlife Art a gift, so I'm very happy to inform you that a coupon code is now available for all the readers and visitors of this blog, so if you're interested into getting the code to receive 10% discount on any item/s purchased at matteogrilliart.etsy.com please send me an email and I will provide you with the code. 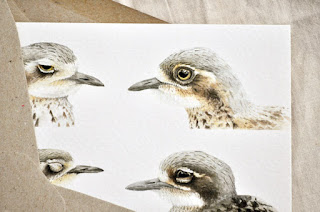 I thing I've been planning for a long time has now been finalized. I'm very very happy about having just released this series of eco-friendly Australian Birds greeting cards . The cards have been printed on a beautifully textured Italian recycled paper and printed with eco-friendly inks. They can be purchased singularly or as a set. They come with a recycled envelope and are blanc on the inside. 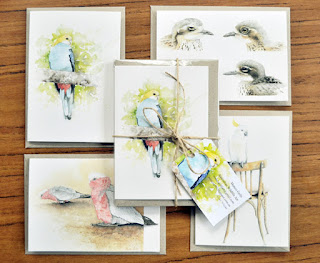 More news about the store? Well, all Medium-size Prints, are now at 10% discount which becomes 20% if purchased with the coupon code, and there is international free shipping for all original artworks.
Also, I just released a collection of Origami Pheasants, the design of the origami is an original of mine as it can't be found in any origami book that I know. Each one has been painted with watercolours. 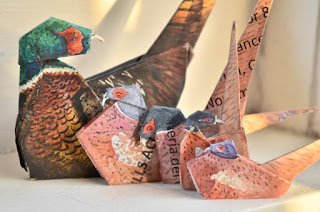 Thanks for reading,
until next time!

All the best
M