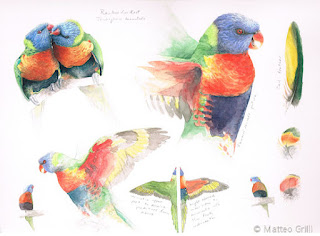 A flock of Rainbow Lorikeets darting and calling each other in the sky. You can't get more Australian than this. I was noticing how nature manages to get some kind of balance, for instance, such a colorful and flamboyant bird is often appreciated for its look but certainly not for its calls, rather harsh and unpleasant for us, even though they sometimes produce some kind of mellow sounding whistles. If we think of all the avian species famous for their songs, they seem to never show a bright colorful plumage, they are in fact rather dull or humble in terms of colours. Feel free to bring some examples if you know otherwise! 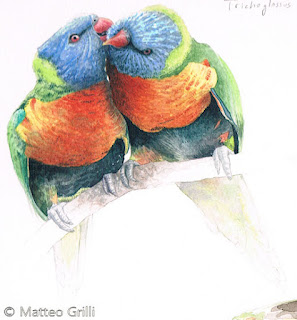 As all other parrots they seem to tie very close bonds within the members of a couple. 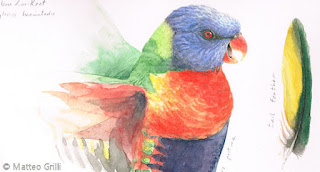 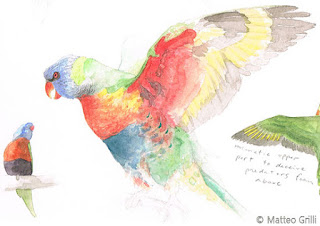 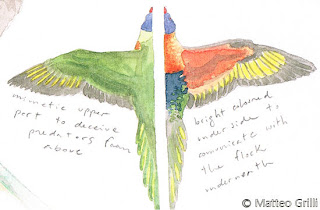 And yet their colours are not just pretty, they end up being very useful to communicate within the flock and to deceive predators. Predators looking from the sky would find it hard to focus on a single bird looking just as the tree canopy on which it feeds, while other members of the flock will never loose eye contact with one another, thus helping each other as all flock birds do.

Shop update: the opening of my online shop has been delayed for a little bit longer, I was probably too optimistic, I just want to make sure everything is just right, this week I'm going to see some print samples and hopefully by the end of this week or the next at the longest I'll be ready for the opening. Exciting times!

All the best
M
Posted by Matteo Grilli 12 comments: 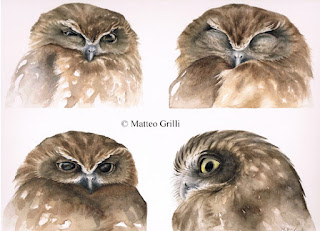 I'm glad I was able to gather enough material to work on another Avian Faces Series painting dedicated to an owl, the Boobook Owl, Ninox Novaeseelandiae. I see owls' faces as some of the most expressive in the avian world and the four represented here are only a few among the wide subtle range I could see. 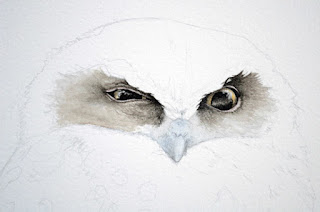 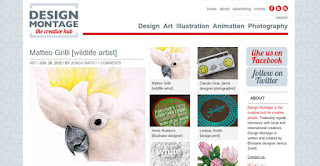 Also, for those who are interested in buying prints, at last, after the originals I sold, I have selected 8 paintings which are now being scanned and will soon become prints. I'm planning to open my Etzy shop within next week, finger crossed!

All the best
M
Posted by Matteo Grilli 10 comments: