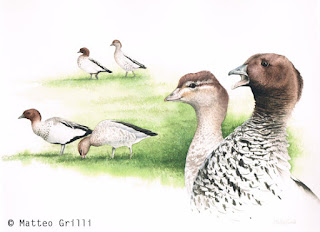 This beautiful duck, Chenonetta jubata, is the only living species of the genus Chenonetta and has features of both dabbling ducks and geese. They look like small-size geese in many ways, the shape of their beak, the way they graze, their habitat, that is mostly open, short-grass land not far from water, in fact they love golf clubs and similar kind of lawns. 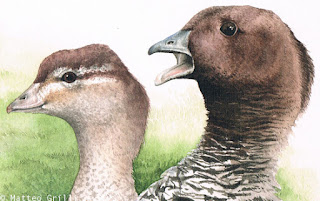 Male and female have obvious differences. The call of the male reminds me of the whistle of the Eurasian Wigeon, but much softer. They can also be heard honking and chattering in a way similar to that of geese. 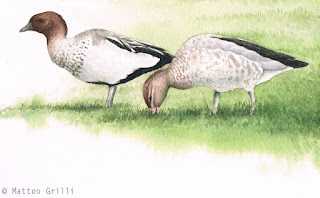 Their breeding behaviour is similar to that of the American Wood Duck and the Mandarin Duck: the female lays her eggs in a tree cavity and the ducklings will leap from the nest just after hatching, landing on the ground without any injury and following both mother and father thereafter. 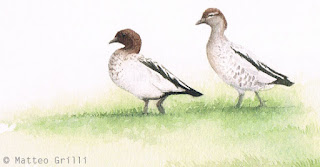 Outside the breeding season I noticed they gather in larger groups, still maintaining visible pair bonds within the flock, males seem to be rather territorial of their feeding patch, chasing away possible competitors in a very goose-like way that is running towards the 'enemy' with head and neck lowered near the ground. I also had the impression that there was some kind of a 'head of the flock' keeping an eye over the fellow members of the group while the others were quietly grazing around. During the breeding season though, the flock seems to break apart and pairs seem to live in a closer relationship on their way to raise a family. 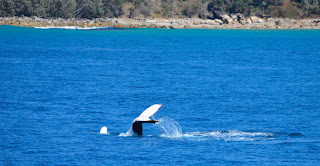 This post is not going to be about my art but about a beautiful experience that I want to share with as many people as possible. It is about whales, Humpback Whales.
We couldn't have had a better day to go whale watching, a beautiful early September day, not one cloud in the sky and the sea just flat and promising.
If you find yourself in Brisbane between June and November, Brisbane Whalewatching starts daily tours from Redcliffe's jetty and will bring you to the northern tip of Moreton Island, just between Moreton Bay and the Pacific Ocean where several pods of Humpback Whales gather to winter and to give birth to the new generations.
We left at 10 am on a catamaran especially designed for whale watching and led by captain Kerry Lopez, apparently the first and only woman to lead a whale watching business in the South Pacific. 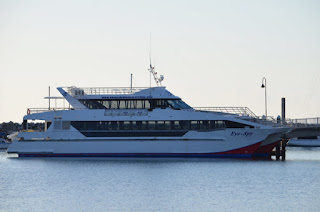 The crossing to the old Cape Morton lighthouse is about 40km and just after leaving we could spot lots and lots of blue jellyfish swimming close to the surface and about half way we were greeted by a pod of jumping dolphins. After sailing along Moreton Island and admiring its woods, sand dunes and awesome beaches, the captain reported a sighting of a pod of Humpbacks just in front of us, then another one on the right and another on the left and then we realized we were surrounded by small pods of whales, around twenty individuals altogether, all blowing and coming to the surface one after the other until a curious one decided to take a closer look of us and swam around the vessel. 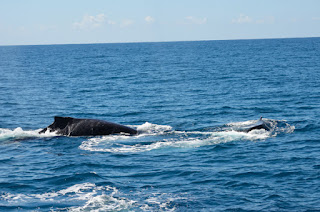 The motors of the catamaran got switched off not to become dangerous for the approaching whale. Whale watching industry follows rather strict rules on how to behave out on the sea with cetaceans, for instance it is not allowed to get closer than 100 meters to the animals and touching or feeding is forbidden as well. Vessels should also sail at a low speed and close encounters are allowed only if decided by the whale.

The catamaran got slowly closer not to scare them away and a small pod approached us swimming around the vessel. Every now and then a whale swam under the boat coming up on the other side blowing air out of its blowholes. We were able to observe a series of surface behaviours such as blowing, fluking, flipper slapping, breaching and spy hopping, all devices used by the animals to communicate with other members about their location and size. 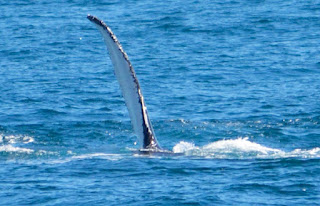 Whale hunting was once one of the primary industries of Australia and was officially closed only in 1979 when just about 100 Humpback Whales were left on the eastern coasts of the country. Since then numbers have risen at the rate of 10-11% every year and in 2006 about 8000 individuals were counted. Today Humpback Whales are considered vulnerable all over Australian coasts. 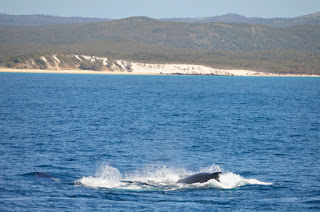 We've enjoyed the company of the whales for over two hours, watching them coming out of the water many times and very close, at a certain time we've been served a buffe' lunch, vegetarian, vegan options and alcohol drinks available, all included into the ticket's fare. While having lunch we could still enjoy the view of these beautiful animals swimming all around. Southern Hemisphere Humpback Whales winter in the tropical waters of the eastern coasts of Australia at the same time when they give birth to the young ones. While at the tropics, they live on the reserves of fat accumulated during the Antarctic summer when they are able to feed on krill. They return to the Antarctic waters every November to be back along Australia's coasts the next year around May or June. 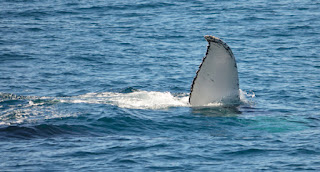 We watched the Humpback Whales for a while after lunch, until they started drifting away in the immensity of the blue ocean. Then we started heading back to the Redcliffe's jetty. To see these awesome mighty animals free in their natural habitat was an amazing experience that I hope to repeat next year when they'll be back up again in the warmer waters of the Queensland coast. The city of Brisbane with its high buildings as seen from the Moreton Bay was just a tiny clutter of small, grey rectangles surrounded by the immensity of the sky, the sea, Moreton Island and the whales.

Brisbane Whalewatching gives a guarantee for seeing whales as if one day they decide not to be visible or if the weather conditions do not allow the trip, your reservation won't be cancelled and you'll be provided with a second free trip for the first day available.
Posted by Matteo Grilli 11 comments: