Found a baby Tawny Frogmouth? Here is the best way to help. 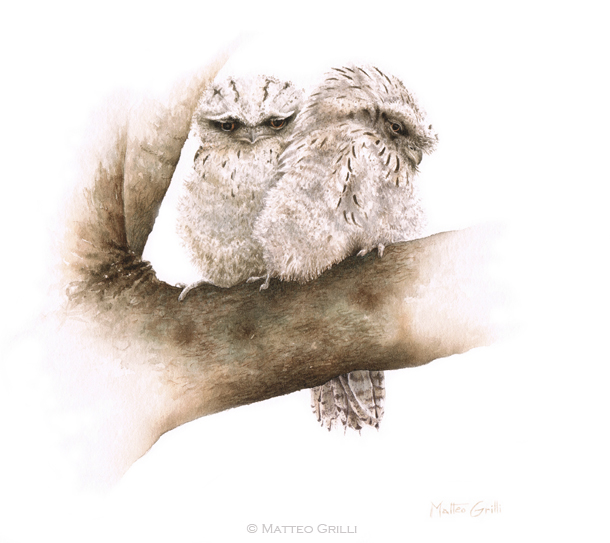 In this post I am going to share the account I wrote last year about my experience in reuniting a baby Tawny Frogmouth with its family, hoping it will be helpful for the readers in case they will find themselves in the same situation during the new coming breeding season.

On October 2012, I noticed a Tawny Frogmouth sitting on a nest located about six or seven meters from the ground in the park in front of my house. Not long after noticing the nest I could see the white dawn of the newly hatched babies. I've been watching the nest every day, enjoying seeing the baby Tawny Frogmouths growing very quickly. By the size of the two chicks it was obvious that one was older than the other.

On November the 9th I went out at about 5 am and I saw that the nest was empty and one chick was on the ground at the bottom of the tree. The night before I saw parent and chicks in the nest just before sunset, so I presume the eldest chick fledged during the night. At that moment I could not see any other member of the family. The baby didn't show any sign of sickness or visible injury. I decided to put it into a box and went to the local vet who gave me the contact of a local carer and the baby Tawny Frogmouth eventually ended up with Sandra Bayley, the local carer specialised in Tawny Frogmouths.

On November the 10th I was contacted by Sandra who suggested I tryed to reunite the baby with its parents on the veranda of my house which faces the park where the Tawny Frogmouth family lives. Between my house and the park there is only a street which is usually very quiet. I arranged a basket on the corner of my veranda tied to the railings and at dusk I placed the baby inside the basket. The baby appeared to be very active and started begging for food and moved out from the surrogate nest right onto the railing. My veranda is about three meters high from the ground and surrounded by a big Jacaranda tree. Everything I observed was from the inside of my house, through the closed door and window, I also turned the lights off and closed the curtains watching only through a small opening between the curtains to avoid any stress for the parents.

I put the chick out at around 6.15 pm. The baby started begging straightaway and within about twenty to thirty minutes one parent arrived and after checking the situation for a few seconds from the branch of the Jacaranda tree just in front of the veranda, flew onto the railing and fed the chick. I believe the parent was the male as there are some differences between the two parents. The one which came is a bit bigger than the other as well as less shy in the presence of humans and grey in colour. The other parent which never came to visit our veranda is a bit smaller, shyer and has a reddish tint on the feathers.

I was able to observe the parent hunting from the surrounding branches and feeding the chick every ten to twenty minutes. The baby Tawny Frogmouth never stopped begging and the begging increased as it could see the parent flying towards the veranda. I noticed that the parent makes a small marble-sized ball of pre-ingested food with sudden movement of its crop and then passes it into the baby's mouth. Feeding occurred in this manner for a few hours. Around eleven pm there was a break as I could not see the parent for 45/60 minutes. I went to bed just after midnight when I last saw the parent coming to feed the baby.

The morning after, on November the 11th, I woke up at 4 am and I saw the same parent feeding the chick twice before the daylight started to increase. While the baby was alone a couple of Magpies and Noisy miners came and got very close to the baby and just as I opened the door to put the baby in the box to prevent it from being harassed, the parent (father) flew over and perched on the closest branch to the baby. The parents' beak was wide open and it was clear that it was defending the chick. The other birds eventually flew away and the parent perched on the railing and after a few minutes adult and chick were snuggling side by side. After a few hours for some reason the baby fell just on top of a potted plant located just below the railing, I decided to get the chick and put it back on to the railing, the parent didn't seem to be worried, it just kept staring at me without showing any defensive behaviour.They spent all day on the railing of our veranda, even when myself and housemates had to go out and pass at a distance of 2-3 meters the birds didn't seem to care too much, they just changed their shape into the branch-like position.

At 6.20 pm of November the 11th the parent left the railing and started hunting and feeding the baby just as the previous night. I watched the parent feeding the chick every 15 to 20 minutes for about three hours. At 4 am on November the 12 the parent came to feed the baby a couple of times within few minutes. The baby was very active and was flapping its wings energetically until it fell from the railing. The parent was not around at that moment so I took the baby in my hands and walked towards the park. I found a low branch and I put the baby onto it, the baby soon started moving upwards on the branch flapping its wings and started begging again. Within a couple of minutes father flew on the tree followed by mother and after a few minutes, by the eldest sibling. The family was now reunited on the same tree where they spent the all day.

At dusk I witnessed the first flight of the young bird I rescued, it was a very short one, maybe one meter branch to branch. Later at night I was out again to see the birds, I could hear the baby begging for food from a very high tree branch and the parent was hunting around. I was now able to watch very thoroughly the parent (the same that came to our veranda) hunting as he was not scared by me being there and the light of the street was providing me with enough light to see. Still I was not quite sure if the begging chick up in the tree was the one I rescued or the older sibling. I could not see any other young or parent around.

The morning after on November the 13th, at 4.15 am, I was very surprised to see the young Tawny Frogmouth I rescued already able to fly tree to tree following the parent to get a feed. I was sure it was the bird I rescued because I found the older sibling on another tree not far. Some Noisy Miners and a Grey Butcherbird spotted the fledgling I rescued and started harassing it, the father came to defend it but didn't stay for long, the chick was then left alone being pecked by the angry Butcherbird who repeatedly hit the young Tawny Frogmouth. The father flew on the tree with the older sibling for the day roosting. I couldn't do too much as it was rather high on a branch. The harassing eventually stopped and the fledgling didn't seem to be much bothered. I had the impression that the parent didn't defend the young as much as he did on the veranda probably because he knew the young was now able to fly and could move if it wanted so, but this is just my thought. The mother flew in and perched on a higher branch and started calling the baby who flew up and snuggled by her side.

The park in front of my house seems to be their territory, it is just a few hundred square meters of bush with different-sized trees generally big and high, there is a small creek and grass and a playground for kids. The park is packed with wildlife by day as well as by night. 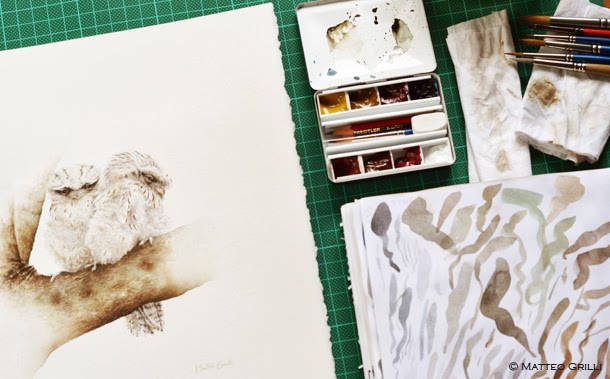 This is a story of a straight and successful reunification, although not all cases are so straightforward, it is always worth trying reuniting a baby Tawny Frogmouth (or any other wild bird) with its family as its parents will always be the best parents. Human rearing should only be considered if no reunification is possible.
I felt very lucky and privileged to be able to witness such an intimate part of the life of these common but very secretive wild birds right in front of my house.

Here are some tips to help you reunite the baby Tawny Frogmouth with its family:

1. Wait till dusk then take the baby back to the exact place you found it as soon as possible, the parents are probably somewhere close by.
2. Establish if it is safe (no dogs/cats/traffic) to put the bird on a low branch or a post in a sheltered leafy area.
3. At dusk, which is the moment they become active, watch the baby from a distance, it should call out for food and the parents should come and feed it every 15 to 30 minutes for the whole night.
4. If no parent come to feed the baby right away, just leave it out for the night and check if it's with a parent the morning after, if you believe the baby is being left unattended, it needs help, put the baby into a box, contact your local wildlife association, sometimes vets can also be helpful.
5. The best time to check if the family is together is at dusk and before sunrise.

If you found this information useful, I would love to hear your stories, please do not hesitate to contact me, every case is different and sharing information is always important to raise the knowledge. Thank you
Posted by Matteo Grilli